Ever been in one of those situations when a solution almost seems *too* easy? That’s how I felt recently when I integrated Roslyn’s scripting engine into at an existing codebase with a speed that very nearly made my eyeballs bleed.

I was stumped. As I'd mentioned previously, I'd been experimenting with creating marble diagrams to help me define the different events and state transformations in a simple proof of concept game.

My understanding and knowledge of many of the concepts and patterns involved with using the Reactive Extensions is unfortunately sparse, so I couldn’t make much progress without feedback so I could work through different ways of composing the logic.

Doing that requires that there be some means of comparison between the two, but my thick skull can’t make the translation without help. I needed a way to go backwards, from code to diagram. A quick set of searches revealed two main options.

The official Rx samples contain a simple app that allows you to select from a list of expressions to diagram, and supposedly allows direct text input of expressions. Promising! Our other pre-made option is the RxSandbox marble diagram generator. Screenshots seem to give the RxSandbox a solid edge over the first, but before making any judgments, we’ll have to actually run it to see what it’s capable of doing. Two solid contenders for getting me up and running, so let’s get them running and do some assessing!

The Rx have had a lot of churn since their first release almost 4 years ago, and as a result, code samples and documentation aren’t always functioning the way they were intended – if they even compile. The sample marble diagram generator did compile and run, but the output wasn’t optimal. Many of the expressions available in the list didn’t generate any readable output, and a quick test revealed no joy in the text input department.

The RxSandbox is clearly explained by the author, and does exactly as advertised: it produces clean, attractive-looking diagrams from code expressions. It didn't take too long for me to come across a potential show-stopper though when I found that the expressions to be diagrammed have to be hard-coded and compiled into the app at design-time. If it only I could enter an expression at runtime and see the resulting diagram, I’d be able to really improve my learning cycle. But alas, another promising solution an early demise.

Focus on the problem

The core problem I was facing is that I needed to be able to compile a string into a programmatically analyzable expression. Better yet, what if I could compile that string into a directly executable delegate, and diagram the results? The author of RxSandbox, Marcin Najder hints in his post, which I later confirmed by looking through the source, that the extensibility model can handle delegates, Funcs, and lambda expressions with no problem. Perfect!

Unfortunately, it’s not possible to directly input text at run-time without some heavy hoop-jumping with Code DOM, assembly loading, and the like. Bummer. Struck out again!

Bam. Compiler-as-a-service has just been made available to the app. It's just that easy! It turns out there’s this could be a compromise third option! Roslyn is still in the experimental stage, but it includes a scripting API that allows arbitrary strings of C# code to be executed in-place. It also turns out that integrating Roslyn into the app is easier than you may think. Here’s how:

Part of this code lets Roslyn know what and where assembly references and usings needed. This is accomplished using some light reflection hackery, but since it only happens when the class is first created, so it's not enough that I want to address it immediately. Put it on a list of refactorings to-do. On a random note, if this concept proves out, it would demonstrate how we could add new features so extremely cool they border the absurd to this application. I imagine a module would be possible that upon given the path to a .csproj file, walks the project structure crunching and analyzing source to generate interaction marble diagrams for each state interaction in an application by virtually executing the source code line-by-line and analyzing the results of passing sample data through the system. Neat.

Build and run the app, and you should see a new entry in the treeview on the left side of the window under the group "StringExpressionProvider". Double-click that entry and you'll be presented with what could seem a non-result:

Fret not dear reader! Clicking on the Live diagram, entering a value and clicking the OnNext a bunch of times reveals that we have hit pay dirt! The fact that the provider showed up in the tree view means that it is being created and loaded. If it's been loaded, then that means the Roslyn integration worked, and the expressions were created and passed to RxSandbox. 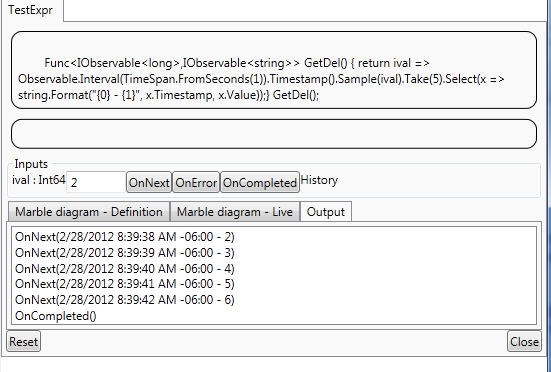 Yes, because we've successfully completed our spike of this functionality, and no because while it has proved itself a working candidate for solving our original problem - namely that of generating marble diagrams from arbitrary code, we still have a number of stories that haven't yet been told.

Just because we can display some pretty circles in a swim lane doesn't mean we're totally there yet. There are still some important limitations with our current implementation. Here's our scratch backlog:

Something I just can't leave alone is the fact that there are tools out there that give us many of the capabilities we've been looking for that we currently don't have, with less overhead. I think that something worth exploring is to retain the cleanly separated RxSandbox.Infrastructure classes and wrap it into a LINQPad plugin. Related thoughts:

Welcome to my website! I'm going to be posting more in coming days as I put together more content for Infestation. It's always interesting how much time is spent running a business that